Aliens I Want To See on Planet Earth

David Bowie once asked if there was life on Mars. These days, scientists are asking if there is life anywhere - and hopes are that we may find it soon. 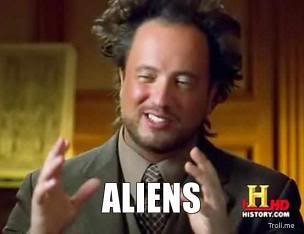 Jupiter's moon, Europa, has emerged as a likely candidate, and NASA's launching two probes to investigate. Already we know the moon has the three requirements needed to sustain life - organic matter, an energy source, and soluble water - so I guess we'll see there's anything out there once the Jupiter Icey Moons Explorer project launches later this decade.

In anticipation of discovering extra-terrestrial life, I've made a list of some aliens I want - and do not want - to make first contact with.

E.T. is so cute. He gets you mad air on your push bike, has amazing phone reception, and teaches you to love all over again. More E.T.s can only be a good thing, so I hope they're all living on Europa.

Do Not Want - Kang

Since he only appears on The Simpsons at Halloween - the scariest time of the year - I have my doubts. I like that he enjoys to laugh, but I do not like how slimy and menacing he is. There was that one episode where he was voted president and enslaved the world to build a ray gun to aim at some planet I've never heard of, so I don't like that about him either. I'd have voted for Kodos.

This is a really easy one. Baby Yoda is a happy little fella. He's curious, he loves soup, and he can do the magic hand thing. What's not to love? Sure, his arrival on earth might bring some unwanted attention from rival bounty hunters, but I'm sure it would make for an entertaining situation.

Do Not Want - The Alien from Alien

Want - The Spaceballs parody of the Alien from Alien

Despite a bad first impression - busting out of John Hurt's insides - this charming little critter soon launches into a jolly song and dance number, hat in hand. With such talent and showmanship, I think he'd be a bit hit on planet earth.

The jury is out on the "Mysterious Alien Creature" from the awful E.T. rip-off movie, Mac and Me, about an alien who loves to drink Coca-Cola and hang out at McDonalds. Is he cute or kinda terrifying? Will he cause too much mischief? The film is among the lowest rated of all time on IMDb, so maybe it's for the best that we never find out. This is a popularity contest, and I only want cool aliens on my planet.

Do Not Want - Avatars

Nobody is holding out for these guys, we can do better.